The Israeli news website Haaretz included the cache of silver and gold cultic items discovered by the Tel Gezer Water System Excavation in its list of top archaeological finds of 2016.

Read about this and other top finds at http://www.haaretz.com/archaeology/1.761814

The Gezer water system excavation is a joint project of the Moskau Institute for Archaeology at NOBTS and the Israel Nature and Parks Authority (INPA) along with Liberty University School of Divinity, a dig consortium member. The excavation is directed by Dennis Cole, Jim Parker and Dan Warner of New Orleans Seminary, INPA chief archaeologist Tsvika Tsuk and Eli Yannai.

The cache of items, which included a silver pendant devoted to Canaanite and Mesopotamian deities and a Hyksos-era scarab set in a gold frame, was wrapped in a linen cloth and placed in a clay “container” made of two bowls. The container was then hidden in the foundation of one of the rooms.

Warner believes that the cache represents a “foundation deposit” meant to bless the room.

“Finding a foundation deposit like this one in what appears to be a public storeroom is rare,” Warner said. “Surely it had a religious function; an offering to gods to make sure the structure would remain standing.”

By Dan Warner and Eli Yannai,
Co-Directors of the Gezer Water System Excavation


KARMEI YOSEF, Israel – During the summer of 2016, New Orleans Baptist Theological Seminary conducted its seventh excavation season in the Tel Gezer Water System (Fig. 1). The dig has removed over 550 tons of debris from the system to date reaching a depth of about 145 ft. Still the bottom of the system has not been reached. This summer’s work revealed hidden secrets of the water system which place it alongside some of the remarkable engineering achievements of the ancient world. It is one of the oldest of its kind.

Determining the date of when the system was first carved has been a top goal for the excavation team. From the time R.A.S. Macalister first discovered it in the early 1900s, to the modern excavations at Gezer in the 1970s, no firm date has been established, until now. From the excavations inside the water system and the gate complex, significant finds were made this summer that have substantial impact on the dating research.

In the quest to determine a date, several factors were realized:

The connection between the gate and the water system appears obvious. To confirm the perceived connection, this summer’s excavation expanded into the gate complex (Area D) and its associated storerooms west of the gate (Area C). In addition to their connection/relationship, the team wanted to determine if any earlier construction lay under the gate and storerooms. Presence of earlier structures may suggest an even earlier origin for the water system. These areas were supervised by dig co-director Dr. Eli Yannai of the Israel Antiquates Authority with his assistant supervisors Dr. Chet Roden (Area C) and Gary Myers (Area D).

An Earlier Occupation
At the Canaanite gate the team discovered earlier, previously unknown construction. Sinking a probe along the northeastern corner of the southern gate, two parallel walls appeared, both running on an east-west axis (Fig 3.). The walls are clearly below the stone foundation of the gate. These walls were not known until this summer. The extent and function is yet to be determine, but the importance of these walls lies in the fact that they predate the gate. Based upon the ceramics found within the fill associated with these walls, this suggests a Middle Bronze Age II A (2000-1750 B.C.) date. The gate has been dated to a later period, namely the MB IIC (1650-1550 B.C.). The existence of these walls changes the understanding of the gate complex’s development and the understanding of the development of the MBII culture at Gezer. The gate area includes at least three phases of construction.

The first phase includes the construction of the two walls. A second occupation phase can be witnessed that predate the construction of the gate. This phase was confirmed by a tomb – a jar burial (Fig. 4) which likely contains the remains of an infant. What is significant about the tomb is that it was cut deliberately into one of the two parallel walls. This clearly demonstrates that the burial is from a latter occupation. It is yet to be determined who put this tomb there, but it is clear that the burial came after the walls were built. The final phase is the gate itself. The foundations of the gate were constructed over both the tomb and the parallel walls. This is the only gate from MBII. This new revelation has significant implication for dating the construction of the water system – one could now argue for an early hewing of the system (during MBIIA, close to the time of Abraham and closer to the time of the Jebusite water system in Jerusalem). This pushes construction earlier than most have thought. Interestingly, this is approximately the time Macalister dated the system when he discovered it. This makes the Gezer Water System one of the oldest system of its kind in the ancient world. The dig supervisors will return to Israel this fall to oversee the clearing of the rest of the material in the system -- still a monumental task. The complete clearing of the system could provide additional answers regarding the date.

Silver and Gold
The most interesting finds of the seven-year dig came this summer in Area C. In the course of excavating the storerooms the team discovered a void under a series of flat stones near the foundation of the northern wall. In the void excavators found a “pottery box” (a pot with a lid) with a small horde of metal objects fused together (Figs 6, 7). Upon first examination, the team noticed what appeared to be a silver bull amulet with horns. A stone scarab wrapped (Fig. 8) with a gold band was attached to the sliver amulet (Fig. 9). A cluster of unidentifiable silver objects were also found. All the objects were wrapped in a fine linen fabric and carefully placed under the wall in this pot. This is known as a foundation offering. It was placed in the room before the construction because the ancients believed it would provide stability for the structure. This deposit was found and excavated by one of the dig volunteers, Savannah, a college student from Tampa, Fla.


The objects were quickly taken to the Israel Antiquities Authorities lab for preservation and analysis, under the supervision of Dr. Naama Sukenik (Fig. 10). The objects appear to have survived a fire and after careful unraveling, all together six objects were noted. Objects included a silver disk, a crescent-shaped piece (the two were first thought to be a bull motif), a possible ring, an arrow-shaped pendant, a yet unidentified silver cluster and the golden banded scarab. The disk includes an engraved image and is still being studied. The team cleaned the scarab and disk with crescent (Fig. 11) and will release additional details when more is known about the designs. The linen in which the objects were wrapped contained silver chips and other elements yet to be determined. Parts of the linen were fused to the silver pendant. The “golden” scarab was sent to Dr. Daphna Ben-Tor for analysis. She dated it to the end of the Middle Bronze Age IIC, a date very consistent with the dating of the building as a whole. It appears to be Canaanite in origin, but mimics Egyptian symbols. Only one other scarab of this design has been found to date. Macalister discovered it at Tel Gezer (Fig 12). It did not include the golden band which allowed the scarab to be worn as a ring. Another scarab was found in the center of the floor of storeroom with the horde, but it has yet to be dated.

Questions Remain
Some technical questions still remain. Where did the metal come from? Who were the artisans? Were they from Gezer, Egypt or even north into Syria? The IAA is not finished with their analysis. Their research could help answer questions or origin and chemical makeup of the pieces. Foundation deposits are not uncommon in the ancient world, but this deposit stands as one of the best documented at Tel Gezer.

In the five storerooms, our probes reached earlier walls like those found in the gate complex. As with the gate complex, all pottery dated to the MB IIA. Bedrock has not been reached in these areas, which leaves the possibility of an even earlier stratum. Further work in both areas C (Storerooms) and D (Gate complex) will address lingering questions next season.

Up from the Mud
Another interesting find this summer was removed from the packed mud near the bottom of the water system. After years of removing massive amounts of discarded storage jars (mostly from the Late Bronze Age), the team uncovered the most interesting find to date – half of a clay mold for making idols.

Known as the “Lady of the Abyss” (Fig. 13) by the dig team, the mold measures approximately 2 and a half inches square. It appears to be an Egyptian or Egyptian-inspired design. A wax imprint of the mold will be made to give a clearer picture of the research. What is the mold's relationship to the water tunnel? It is difficult to say. It may have been used to produce idols for the workers – a “security blanket” of sorts to keep them safe while digging this monstrous system – or it may have been discarded in the system after it was broken. If the mold can be dated, it will help determine the dates the water system was in use. It was an exciting season, but there is much work yet to be done. Stay tuned for further updates.

The Tel Gezer dig officially wrapped, with some exciting and unexpected findings. We are excited about returning to dig further next year, and to discover more about the ancient Canaanites and this heavily fortified city. Until then, we will miss Israel and our archaeology friends! 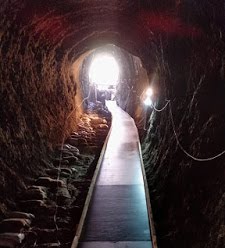